In recent days I’ve taken a good many calls where people are wondering whether or not they have a door or window open. The good folks at Nstar have implemented their new rate increase which has been under great scrutiny since late October. If anyone has had trouble sleeping, I give you the explanation…

Electric utilities in New England are requesting rate increases for this winter. Over the past decade, coal-and oil-fired power plants in New England have closed and now the region is dependent on natural gas for generation and has limited infrastructure to get the gas to markets. In Massachusetts, the two largest electric utilities have requested rate increases from state officials. National Grid received approval for a 37 percent rate increase over last winter’s rates, effective November 1, 2014, and NStar has requested a 29 percent increase, effective January 1, 2015. The rate increases affect more than 2.3 million consumers in Massachusetts. These high winter electricity prices are likely to continue in New England until new pipelines are built, which could be three to four more years, as heating markets compete with electric generators for limited natural gas supplies.[1] Unfortunately for consumers, cold weather has already arrived in many parts of the United States[2], including New England.

According to NStar, the monthly bill for the average household it serves will increase about $28 a month with supply costs increasing 60 percent from 9.379 per kilowatt hour to 14.972 cents per kilowatt-hour . Supply costs are the costs that the electric utility pays for the generation that it purchases, which reflects only about half of consumers’ bills. The other half is the cost of delivering the power to their homes and that part of the bill is not changing. This is the highest level that NStar’s one million customers in metropolitan Boston and Cape Cod have paid for supply costs since 1998, when Massachusetts overhauled its electricity market. 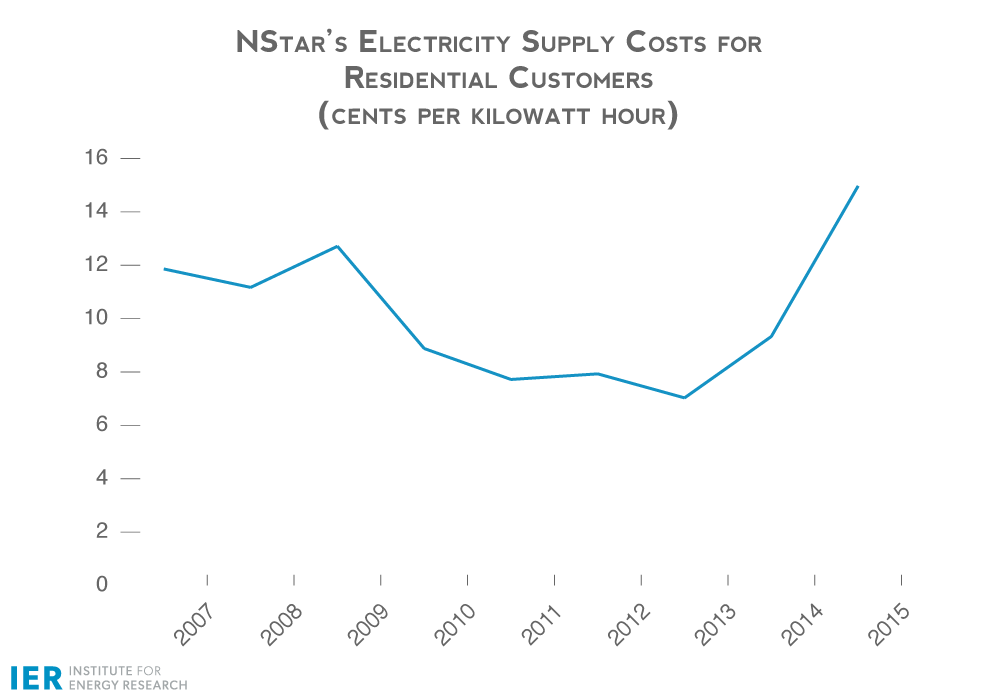 According to National Grid, two-thirds of the cost is from the purchase of electricity from power plants, which is up from just over half of the bill cost last winter. The supply cost is 16.2 cents per kilowatt-hour, up 62 percent from the 10 cents of last winter, and about twice the 8.3 cents under the current warm-weather rates.

National Grid serves about 1.3 million residential and business customers in 172 of Massachusetts 351 cities and towns.[4] 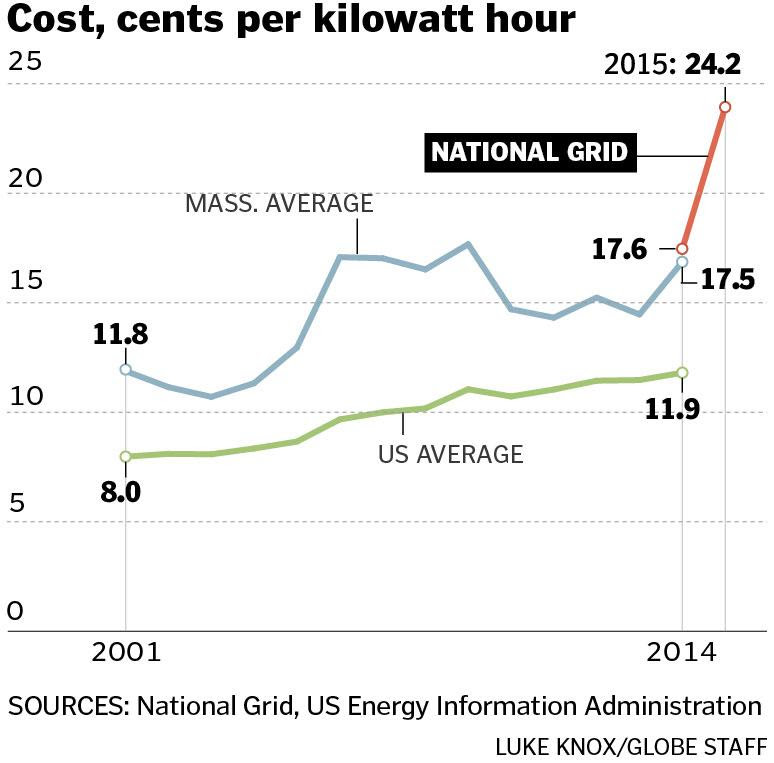 National Grid is also the dominant utility in Rhode Island serving 486,000 customers there. National Grid has requested a 23.6 percent rate increase over last winter’s rates in Rhode Island. The monthly increase for a household that uses 500 kilowatt hours of power is expected to be $21, increasing the monthly bill from $88 to $109. The percentage increases for commercial and industrial users is expected to be similar. In Rhode Island, about half of a customer’s electric bill is for the supply cost of power and the other half is for delivery – transition, transmission and distribution charges – and fees for renewable energy and energy efficiency. As in Massachusetts, almost the entire proposed increase is due to higher supply costs. If the R.I. Public Utilities Commission approves the proposal, the new rates will go into effect January 1, 2015, and remain in place until June 30. The pattern for electric rates in New England is an increase in the colder months and a decrease in the warmer ones when home heating and electric utilities are not competing for available gas supplies.[5]

Western Massachusetts Electric Co. filed for an increase in its basic supply rate, which would raise the average residential customer’s bill by 29 percent for six months beginning January 1, 2015, increasing the average residential customer’s monthly bill by about $26. The rate increase would raise the supply charge to 14.015 cents per kilowatt hour. Customers using an average of 500 kilowatt hours per month will see their monthly bill increase from $90.40 to $116.26 after January 1. Western Massachusetts Electric supplies electricity to 15 of Berkshire County’s 32 communities.[6]

Connecticut Light & Power requested a 26 percent increase for residential customers starting next year. Generation rates (supply costs) are expected to be 12.629 cents per kilowatt hour from January 1 to June 30, 2015, for residential customers, an increase from 9.99 cents per kilowatt hour in the last six months of 2014. The generation rates or supply costs pay for the production of electricity at power plants and make up about half of household monthly bills. The transmission and distribution rates are also under regulatory review and are expected to increase early next year as well. The increase in generation prices will result in higher monthly bills of more than $18 for a typical customer who uses 700 kilowatt hours. The transmission and distribution increase is expected to increase bills nearly $10 more for the same usage customer.[7] 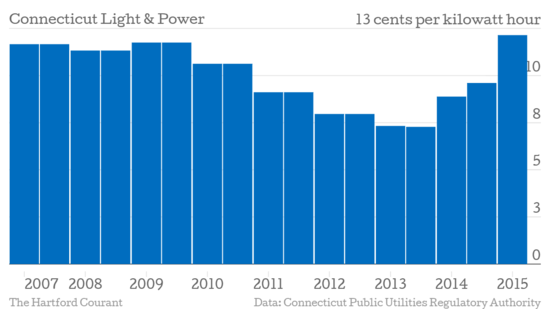 Although shale gas from the Marcellus formation is plentiful and inexpensive, getting it to New England from Pennsylvania is a huge challenge. The six New England states are supplied by only two major pipelines and both are at full capacity. This limited infrastructure in an area with growing natural gas demand has increased the price of electricity in the winter when natural gas is also used for heating. Natural gas for January delivery is trading at almost $19 per million BTUs. In contrast, natural gas in Japan, which relies entirely on imported liquefied natural gas is forecast to cost less than $18 per million BTUs this winter.[8]

Energy experts have warned New England that it would pay a price for using more natural gas for heating and electric power generation without making investments in expanding natural gas pipelines. Kinder Morgan, for example, is facing environmentalist opposition to constructing a new 177-mile pipeline across the northern side of Massachusetts, with a cost of about $3 billion. Northeast Utilities and Sempra Energy have proposed a $3 billion plan to upgrade the capacity of existing pipelines that transverse Connecticut, Rhode Island, and Massachusetts, serving dozens of gas-fired electric generators. It is likely to be several winters, however, before either plan receives federal approval, is constructed, and is put into operation.[9] In fact, the expected in-service date for these two projects is November 2018 provided environmental opposition is limited.[10]

More stringent environmental regulations and low natural gas prices have combined to entice many electricity generators in New England to retire aging coal- and oil-fired plants for natural gas-fired plants, which now generate over half of the region’s electricity mix, an increase from less than 15 percent in 2000. The situation will only get worse as New England is in the process of shuttering more coal-fired units and the Vermont Yankee nuclear plant. The lack of a diversified fuel mix for electricity generation along with insufficient pipeline capacity to move the natural gas to markets has caused the electric rate increases as the New England energy markets compete for the available natural gas. Clearly, New England needs new natural gas pipelines to prevent electricity prices from overwhelming families and small businesses, especially the 10 percent of New England families that rely on electricity for heat.[11] But, environmental opposition is slowing the process for getting new pipelines approved and built.[12] In the mean time, New England families need to pray for warm weather.

As a lifelong resident of the outer Cape I was the third generation to pick up the mantel in the family construction business. In my early twenties, I called the Cape my home on weekends as I spent several years working for a variety of off-Cape commercial construction companies. My site supervision resume includes two supermarkets, two HUD projects, a funeral home and a handful of steel industrial buildings as well as various restaurant and office remodels.